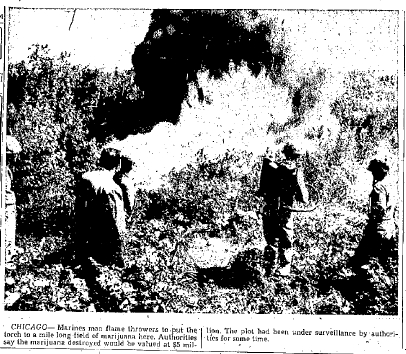 The caption from this syndicated photo in Eureka, California's Humboldt Standard in August 1957 pretty much says it all. An article in the Hayward Daily Review four days earlier noted that the Cook County sheriff was withholding the exact location of the patch. My guess is most residents could have simply followed the smoke and skunky odor to thegrow site, which does not appear to be in a particularly urban area.

Huge, outdoor grows like this one were rarely found near large cities, where people often grew marijuana in window boxes and vacant lots.