June 12, 2015
Thanks to a plethora of books, articles, documentaries, and TV and radio stories, many people across the country know Northern California as the hotbed of cannabis agriculture in the Golden State. Today, the region is home to an estimated 30,000 grow sites. But before the Back-to-the-Landers seeded a revolution in the redwood-covered hills during the 1960s and '70s, nearly all California-grown cannabis came from the farms, ranches, cities, and suburbs from Sacramento on south.

The following maps show a total of 142 instances of cannabis cultivation in California from 1900-1960; of those, 75 instances were reported between 1950 and 1960. The map on the left shows cultivation sites from c. 1900-1950 (the colors mark the decade but aren't relevant in this post), and the map on the right shows sites from 1950-1960. Note the relatively scarce amount of reports on Cannabis cultivation over the first half of the twentieth century (left), as well as the conspicuous absence of cultivation in Northern California throughout both periods: 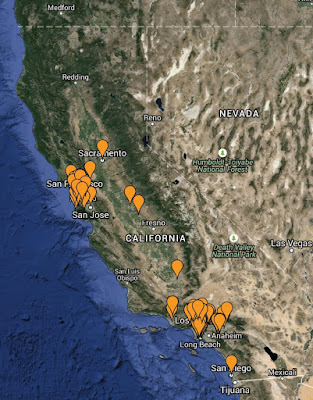 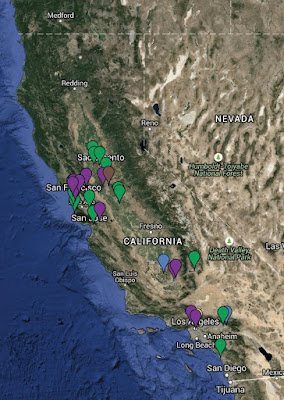 These maps also demonstrate an important shift in the location of cannabis cultivation, from rural sites such as farms and ranches to urban and suburban sites such as backyards, gardens, and parks.

Zoomed-in versions of these maps more clearly demonstrate the shift. First, the map of cultivation sites from 1900-1950. Note the sporadic locations of sites in the rural Central Valley, as well as on the outskirts of cities such as Sacramento, San Francisco, and Los Angeles: 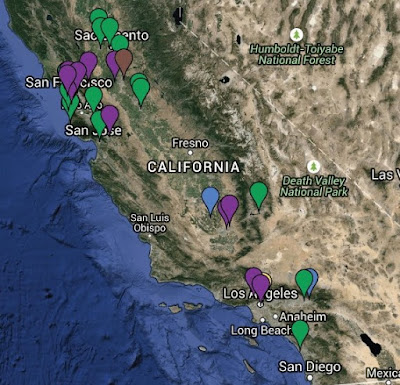 Now, the map of the 75 reports on Cannabis growth from 1950-1960. Note the lack of reports from the rural Central Valley, as cultivation sites (as well as instances of natural growth) clustered in the San Francisco and Los Angeles Metropolitan Areas. The high density of cultivation reports in both locales reflects an emerging cannabis culture amongst the rapid urbanization and population growth after World War II: 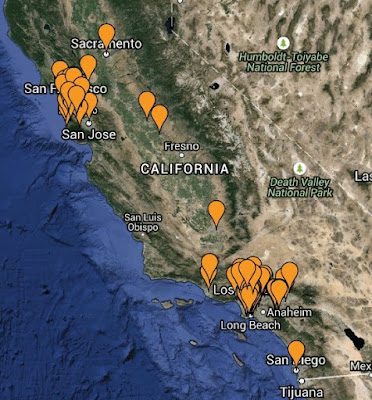 Cannabis cultivation was prevalent in many urban areas across the country during this period, from New York City to Chicago to Denver. But as opposed to other states, whose populations of cannabis users, dealers, and growers were dominated by the working class, California's sunny climate and rampant growth translated into people from all walks of life trying their hand at cannabis cultivation; growers included Hollywood actors, middle-class couples and beatniks, and suburban teenagers, as well as members of the working class.

During the late 1960s a number of factors, including increasing urban crime rates and the decline of urban counterculture enclaves such as San Francisco's Haight-Ashbury Neighborhood, many young counterculturals left the cities for the countryside. A great many of them headed north and ended up in the rugged hills and dense forests of Humboldt, Mendocino, and Trinity Counties; in these remote areas, some began to experiment with cannabis growing for personal use or to make a living. In time they and their descendants would build an entire cannabis-based economy, leading to the region's current nickname, the Emerald Triangle.