The Hempiricist Hits the Road, Days 3 & 4: Medford, OR

August 08, 2015
It has been a very busy couple of days here in Southern Oregon's Applegate Valley.

Yesterday I met up with archaeologist Chelsea Rose of Southern Oregon University, who owns land where a pot grower and breeder, Timothy Williams, supposedly came up with the famous "Trainwreck" strain back in the 1980s. She hasn't been able to pin that down yet, but she did lead me to a fascinating collection of old grow sites (pictures below) that I was able to check out today; on a hike together we even found another grow site that she hadn't seen before.

I'll have more about my time in the Applegate Valley in a later post. After meeting with Chelsea on Friday morning, I spent some time at the Southern Oregon Historical Society (picture below), where I pulled dozens of old newspaper and magazine reports on cannabis growing from the 1970s through the present. These will help bulk up my source base on Oregon, which checks off a major goal of this research trip.

I also hung out at a local dispensary, Pharm to Table, where I talked with the manager, a chill Russian dude named Vlad, the friendly and outgoing business part-owner Jason, and another Jason who works in a lab that tests all kinds of Oregon-grown cannabis for pesticides and other contaminants. More to come on those conversations as well (possibly).

That's all I can spit out for now - hopefully I'll have more time to blog when I get back to Denver, some 1,300 miles from now. I'll leave you with these photos from the last two days of my trip. 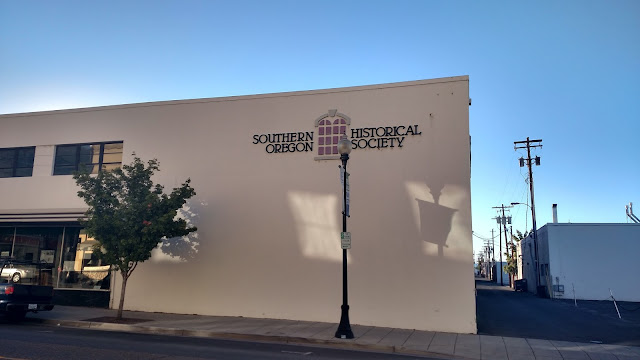