I'm sure nobody noticed, but I've been away from this site for more than a year now, trying to get the second draft of my book done. It is finally done, and I can finally give this blog the attention it's been craving. A lot has changed since my last post, namely:

-The Chicago Cubs won the World Series, and

-Donald Trump is the 45th President of the United States. 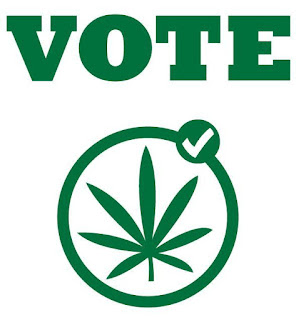 Perhaps God knows that the world will end soon and is at least allowing us to go out smoking a ton of legal reefers - last night (and this morning), voters in California, Nevada, and Massachusetts approved the legalization of recreational pot. But it wasn't just those blue states that went green - Florida, North Dakota, Arkansas, and Montana, all of which went to Trump, approved medical marijuana.

What does this mean? We know that under President Obama, legal weed was generally left free to proceed - see the Cole Memorandum. Will Trump rescind that? He's said that he thinks marijuana should be a "state-by-state" issue, but given how many times he's gone back and forth on many issues during the campaign, that really doesn't tell us much. He's also said he wants to bring "law and order" back to the streets, a phrase that echoes the conservative mantra during the heyday of the war on drugs.

Quite frankly, given what Trump and his movement represents, we're probably looking at an increase in both police brutality and harassment, especially in neighborhoods of color. Trump has not spoken kindly about people living in those places, and they would certainly bear the brunt of any attempt to "get tough" on crime and drugs.

But that's still only what is likely to happen. As this election showed, we don't really know jack. Just have to see what happens.