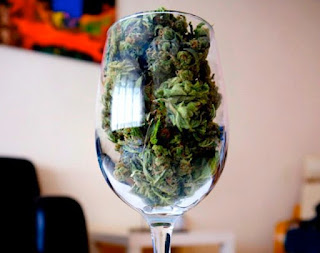 The wine industry in California is worried that legal marijuana is stealing its labor and its kicks, according to a report on Fortune's website.

Writer John Kell explains how the wine industry is actually "crushing it" thanks to "the coveted millenial generation," but it is worried about higher wages in the marijuana industry pulling away migrant workers and that more adults might choose to get buzzed on weed over wine. And apparently, Kell notes that this concern is backed up by some real data:

Personally, if that data is accurate, I don't see a problem there. First, both of those giant beer companies make awful beer that no self-respecting person should buy anyway. Second, alcohol is by far a more harmful and addictive substance than pot, and it will be hard to argue that society is any worse off if more people are smoking weed instead of drinking. That said, I don't think the major beer industries need to worry about their profits - worrying that people aren't going to buy Coors Light is like worrying they won't buy Coca Cola. Even if fewer people buy, corporate beer profits are going to remain enormous.

The wine industry's concerns about labor seepage to weed farms may be legitimate, especially now that California is going to attempt full-on legalization. But the idea that winemakers will sell less product solely because of weed is, I think, a bit paranoid. It comes down to consumer choice, and the people who buy wine generally like it way too much to quit it, even if they like their weed, too.

The race to get American brains buzzing isn't a zero-sum game. Americans have been smoking herb and drinking booze - sometimes at the same time, sometimes not - for decades. In fact, because both products tend to attract the "connoisseur," I could see wine-weed pairings happening, especially in California. Look, there's even this guide that tells you how to pair the two substances! Overall, the competition between makers of wine and weed should be more friendly than fierce.
beer california fortune marijuana wine