Missouri cops not the first officers to think hemp was MJ

October 03, 2017
A few weeks ago, a group of Missouri police officers were so proud of the marijuana motherlode they found that they posed for a quick Facebook pic: 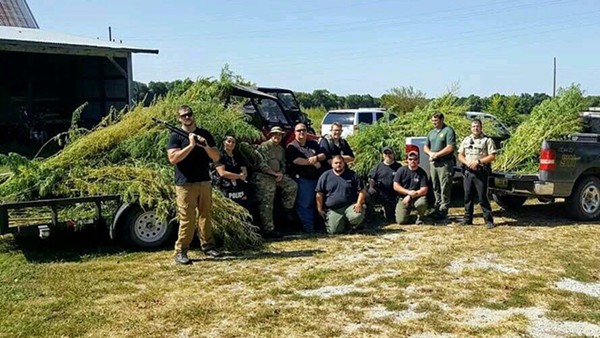 "What a great team effort today," a statement from the Jasper Police Department read, "It was hot and humid and not easy getting those plants."

The statement claimed the "marijuana" plants had a street value of $100,000. Only one problem: those plants are most likely hemp. The Jasper police chief later took down the post, but the internet's legions had already inundated it with angry and corrective comments. Apparently, some of the officers even received threats (side note: this is the second time in the past week I've read about cannabis activists issuing threats - aren't they supposed to be chill?).

The chief later said that his officers found the pot as part of an ongoing investigation into a meth operation, and that he personally did not think marijuana use was a problem.

In further fairness to the Jasper Police, they are far from the only American authorities to have mistaken hemp for marijuana. It happened all the time after the Marihuana Tax Act of 1937, which excluded hemp in theory but not in practice. Just a year after the law was passed, authorities in Montana burned up a fiber company's whole crop of hemp, forcing the mayor of Red Lodge, Montana to denounce the whole episode as a "big mistake": 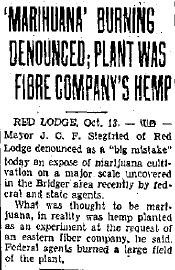 Later, police in southern California pulled up hemp plants from people's yards almost daily during the 1950s, and sometimes posed for photos just like the Missouri cops above: 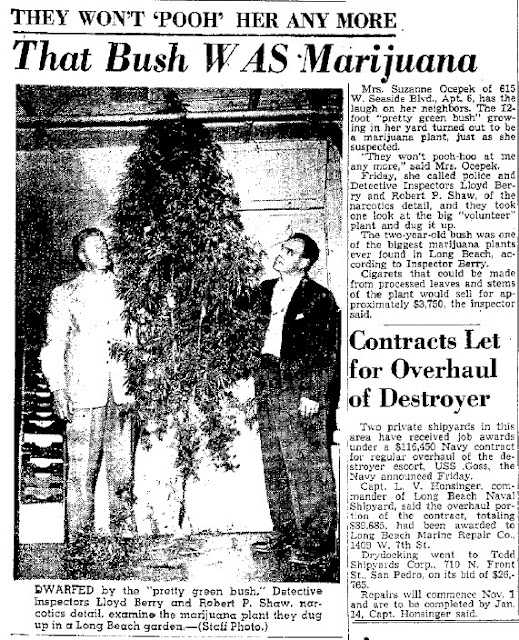 There's so much to love about this photo, taken from the Long Beach Independent in October 1954, from the bewildered expressions on the cops' faces ("GOLLY GEE, WOULD YA LOOK AT THE SIZE'A THAT, LLOYD???") to the article's tinge of mundane suburban drama (my neighbors won't "pooh-hoo" me anymore!).

Photos and stories like this were extremely common after the Tax Act, as hempseed - a major ingredient in birdseed - was spread across the American landscape by animals and the wind. Though the government required all hempseed to be sterilized - lest it sprout into the evil nemesis marijuana - it's clear that not all of it was.

That, or there was some epic "life-finds-a-way" thing happening. Either way, stories of mistaken marijuana identity are reminders of both nature's role in thwarting prohibition and of the cryptic nature of cannabis, a plant that to this day confounds and surprises us.
california cannabis history hemp law enforcement marijuana history montana