Modern Day Reefer Madness: On Halloween, Edibles are Coming for Your Children

Seems like every October, we in the rational corner of society (an increasingly smaller and smaller space) have to endure the breathless warnings of police departments all over the country about malevolent stoners doling out marijuana edibles to innocent children on Halloween.

Local news stations are the primary mouthpieces for these hysterical warnings. This is not surprising, because local news is a shameless clickbait hole of shootings, stabbings, missing white children, and anything else that induces widespread paranoia. 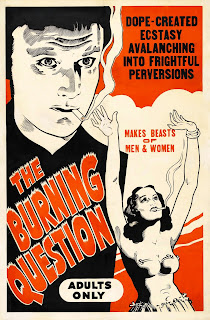 Real news outlets staffed by real journalists recognize that the idea of cannabis consumers giving away their stash for free to initiate a prank they will never see A) makes zero sense, and B) reflects an incredibly cynical and sinister stereotype of cannabis users.

America's police departments are apparently not beyond the nineteenth-century concept of the "Dope Fiend" lurking in the shadows, preying on schoolchildren, motivated by nothing except their inherent depravity.

The current state of American law enforcement - to say nothing of American journalism - is more frightening than most Halloween costumes.

Have a Happy Halloween everyone! And remember, as always, that stoners are vicious people who want to hurt your children by giving them non-lethal treats!
dope fiends edibles halloween marijuana myths modern day reefer madness