August 16, 2018
You've heard of cage-free eggs, but what about cage-free cannabis?

Welcome to Hempirical Discussions! In this brand new podcast segment of the blog, I'll share my conversations with important and influential people in the cannabis world. My guests and I will talk about all things cannabis, including history, prohibition and social justice, the environment, legal and political debates, weed culture, science, medicine, and more! 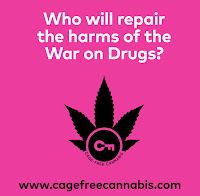 My first guest is Adam Vine, the 39-year-old co-founder of Cage-Free Cannabis, a group that works with legal cannabis businesses to repair some of the damage done to minority communities during the War on Drugs. Based in Los Angeles, Cage-Free Cannabis has partnered with two Seattle-based pot businesses - Fine Detail Greenway and Lux Pot Shop - to produce a special marijuana strain named after Seattle-based band Flavr Blue.

Profits from all sales of the Flavr Blue strain will go toward Cage-Free Cannabis's social justice initiatives, which include the creation of a council to help Seattle's cannabis industry foster opportunities for those communities hardest hit by the drug war.

Here's some highlights from our conversation:

NJ: How did Cage-Free Cannabis come about?

AV: [I] was working with a group of community-based organizations around Los Angeles County ... and while I was working with them and documenting their efforts, I was also working on advocacy in favor of cannabis legalization. Pretty quickly it became clear to me that the benefits of the emerging, above- ground cannabis industry were not flowing back to the communities of color that have been devastated by the war on drugs for decades. ... We needed to construct mechanisms that profits from the industry were going back to those communities and those communities would have a place in ownership in the emerging industry.

NJ: Can you briefly explain what "reparative justice" is and why it's so important?

AV: In this context what we mean is that our sense of justice is informed by history, and by the things that have been done in the name of the war on drugs and cannabis prohibition. And what that has done is devastated and broken communities. People have lost housing, people have lost jobs, people have lost access to education, and they’ve lost their lives and their liberty to this war on drugs. So moving forward, as recreational cannabis begins to spread both throughout the US and around the globe, our sense of justice is grounded in this idea of repair—in that we cannot move forward with this industry without repairing the harms of the past.

Concretely, what that means is beginning with those things that were broken, with the housing, with the employment, with education, with people’s lives and liberties and with the well-being of communities as a whole. . . . And for us, for the cannabis brands that we've consulted with, it takes a variety of different forms, because while so many of these problems are global, their repair and this idea of social responsibility is often very local.

NJ: What would a socially responsible cannabis business look like?

AV: Typically, cannabis brands have engaged in philanthropy or social responsibilty that looks like beach cleanups or feeding homeless people, which is okay, those things are necessary, but they don’t really get at the core of the problems we’re talking about. So that is our job, to bring brands into that longer term, deeply rooted sense of responsibility. . . . But true social responsibility goes beyond giving back. Ideally it should be incorporated into the very bones of the brand itself. That speaks to hiring, it speaks to how workers are treated, it speaks to what the ownership and management team looks like, so that brands should begin to not only diversify - if they're not diverse already - but really put an emphasis on hiring and empowering people who have been harmed by the war on drugs.


NJ: Your group also states that it supports an environmentally sustainable cannabis industry. Why did you decide to add environmental sustainability in addition to social justice? How do you think the two concepts are related?

AV: To us you can't separate them. And I say that for a few reasons. One I believe that the way we treat the planet and the way we treat people are deeply connected, just on a core human level. Also if you look at the costs of our environmental devastation, those costs also tend to be borne by communities of color, disproportionately so. . . . As this specific industry develops, you can see some real concerning environmental costs starting to add up, whether you’re looking at packaging or water usage, in particular. At the same time you can also see the erasure of people of color from this industry. It only made sense to us to treat the environmental justice and the economic and reparative justice ideas as being completely equal.

NJ: Your recent initiative will create a special strain of marijuana that will be sold to benefit your work. Can you explain a little bit more about this strain, and what specifically you'll be working on?

AV: This is a collaboration between a cultivator called Fine Detail Greenway, they’re based in Bellingham, Washington, a dispensary called Lux Pot Shop that has two locations in Seattle, and a band called flavr blue – a seattle band - and us. So the cultivator of this new strain named it after the band, they call it Flavr Blue, it will be sold at Lux Pot Shop, and all the net proceeds from this strain will come to Cage-Free Cannabis and in turn we will then reinvest them in a reparative justice project in Seattle. . . . The first funds will be dedicated to creating a reparative justice council composed exclusively of people who have been directly harmed by the war on drugs. And then that council will be empowered to determine how future funding will be allocated, with a mandate to foster equity, justice, and repair.