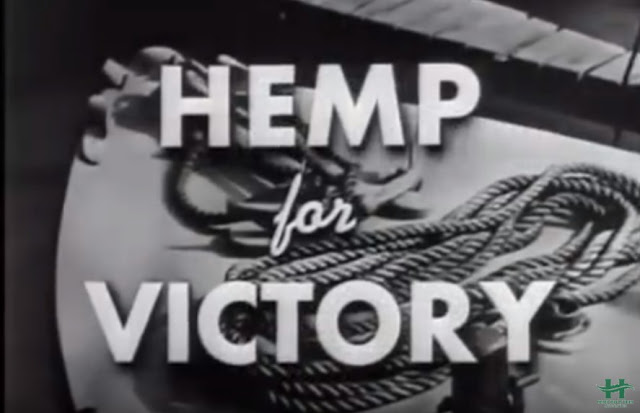 Despite being one of the most important wartime projects in national history, the US government’s World War II hemp program (1942-45), often referred to as “Hemp for Victory,” is still not well understood. Few professional historians have paid much attention to it, leaving cannabis activists and other nonprofessionals to fill the void. This activist literature regularly trots out “Hemp for Victory” to point out the hypocrisy of cannabis prohibition, but it rarely discusses the actual history of the hemp program. With American hemp now legal again via the 2018 Farm Bill and production returning to levels not seen since World War II, the time seems right for historians to dig back in and see just what was going on in America’s hemp-filled heartland from 1942 to 1945.

Why did the WWII hemp program come about, and how did it function? Why didn’t the renewed hemp industry continue after the war, and what did contemporaries say about it? Based on a recent review of hundreds of contemporary news reports and other sources[1], I attempt to answer these questions in an updated, 2-part history of the program. Today’s post tells the story of the program’s origins and implementation; part 2 will explore the program’s decline and how it fit into the political, agricultural, and economic history of the postwar United States.

As the activist literature correctly points out, “Hemp for Victory” came just five years after most cannabis production was effectively prohibited nationwide by the Marijuana Tax Act of 1937. However, far from its oft-understood goal of quashing the hemp industry, historian William B. McCallister argues that the Tax Act was secretly designed to leave the door open for just such an industry, in case foreign fiber supplies were endangered by Japanese aggression in the Pacific during the 1930s:

"Anticipating the insufficiencies of even the most extensive conservation-substitution program, prescient war planners recognized by the mid-1930s that massive domestic cultivation of hemp would likely be necessary."

While it did not enact an outright ban on the crop, the Tax Act required strict licensing and extensive reporting from those who would buy, sell, or produce cannabis, and it laid down harsh penalties for violating terms of the license. By coupling strict requirements with harsh consequences, the Tax Act so discouraged legal cannabis activity that it did, indeed, function like a ban. During Congressional hearings for the Tax Act, representatives from the birdseed industry—the only major hemp-dependent industry at the time—voiced their fears that the law might run them out of business. Lawmakers countered by offering the industry a loophole: hemp birdseed could still be produced, but it would need to be heat-sterilized before it went to market.

Despite hemp’s historical importance as a fiber crop in the eighteenth- and nineteenth-century US, there was only a very small hemp fiber industry at this time, so nobody showed up to defend the crop at the hearings. According to the Federal Bureau of Narcotics and USDA, hemp leaves and flowers were a source of marijuana, and so only the stalk was exempt from the Marijuana Tax Act.[2] This allowed the nation’s few hemp producers to keep operating, but it was a death knell for many stands of feral hemp that occupied vacant lots and other weedy corners of the country. Helped by local law enforcement and citizens, federal agents conducted “anti-marijuana” drives that pulled up “wild” hemp plants as noxious weeds. Meanwhile, the nation’s fiber needs were met by cheap imported fibers, primarily Manila hemp (Musa textilis) from the Philippines and henequen (Agave fourcroydes) from the Mexican Yucatán.

Then came the Japanese attack on Pearl Harbor in late 1941, followed by the Japanese invasion of the Philippines in January 1942. In the Atlantic, prowling German submarines stemmed the flow of goods from the Mediterranean and the Caribbean. Committed to a war that required a well-outfitted Navy, the United States and its Allies now had to reconsider their source of nautical rope and rigging. Just days after Manila fell to the Japanese, the US, Great Britain, and Canada formed a “Raw Material Purchase Board” to buy raw materials for arms production as well as “seek alternative sources of rubber, tin, tungsten, hemp, and other vital supplies.”[3]


As mentioned above, the US government "had recognized the growing tension in the Pacific" before its entry into World War II and anticipated a fiber shortage. When the shortage materialized, the government’s search for replacement fiber sources included experiments with yucca plants in the southwest, transplanting Manila hemp to Central and South America, and planting sisal in Florida.[4] Among these alternatives, it was determined that "American hemp, Cannabis sativa, was the most satisfactory substitute that could be quickly produced." On January 7, not even a week after the source of Manila hemp was compromised, the USDA announced plans to plant 30,000 acres of hemp in the “dark-fired tobacco and blue grass belts” of Kentucky and Tennessee.[5]

The Kentucky and Tennessee hemp was grown not for fiber, but for seed, which would supply a new, government-backed hemp industry in the Midwest.[6] Commissioned by the War Production Board, the program largely functioned through the USDA and its financing arm, the federal Commodity Credit Corporation (CCC, est. 1933)[7]. In January 1942, the War Production Board banned the use of domestic hemp seed for birdseed or “any purpose except for the growing of hemp fibre,” and called for “Midwest farmers to grow a new cash crop.”[8]

Interestingly, not all wartime hemp production was initiated by the government. Soon after Pearl Harbor, associates of the Minnesota entrepreneur V.A. Batzner traveled to Washington, DC, to inquire about starting a private hemp business that would furnish the Navy; they “were given lots of encouragement and cooperation to go ahead,” and Batzner incorporated the Minnesota Hemp Company in early 1942.[9] Additionally, at least two private hemp manufacturers in Wisconsin  expanded operations to meet wartime demand.[10]

Later that year, the USDA released the short film “Hemp for Victory,” and the CCC began contracting with farmers in five states—Illinois, Indiana, Iowa, Minnesota, and Wisconsin—to meet the USDA’s goal of 300,000 acres planted in 1943 (the CCC paid for the farmers’ registration under the Marijuana Tax Act). Meanwhile, the CCC signed a contract with War Hemp Industries, Inc., a subsidiary of the federal Defense Plant Corporation (est. 1940), to manage 42 hemp processing plants that would be built near Midwestern hemp farms and prepare the harvested crop for its transformation into nautical rope, twine, canvas, parachute strings, and other products.[11]

Why those states? Of the five, only Wisconsin had a recent history of hemp fiber production. The USDA recommended hemp “as a good crop for the Corn Belt States, because of their favorable climate and soil conditions.” Indeed, a map of the 42 government hemp mills neatly overlaps with the heaviest corn-producing areas:

The federal hemp program’s productivity over the course of 1943-44 confirmed that the Corn Belt was a natural fit for the fiber crop. Iowa, which had no hemp acreage in 1942, set a goal of 60,000 acres by 1943 and hosted 11 mills.[12] Indiana’s 1943 target was 20,000 acres, but Hoosiers only planted around 8,000 and received only 2 mills.[13] Farmers in Illinois and Minnesota contracted for enough acreage to serve 11 mills in each state. Wisconsinites planted 31,000 acres[14] to serve 8 mills. Individual farmers, especially those who managed to produce high-quality fiber, saw exceptional profits that ranged from about $50 to upwards of $200 per acre, a price fetched by few other agricultural commodities at the time.


Overall, in just two crops—1943 and 1944—the nation harvested approximately 186,000 acres of hemp, providing more than enough raw material for military needs.[15] In fact, the government had so much surplus hemp after the 1943 harvest that it had to pay American cord manufacturers to “absorb a portion of the domestic hemp supply.”[16]

By the winter of 1943, Midwestern hemp farmers were busily delivering the final bushels of hemp to their local mills. Marveling at their new, profitable industry, they were anxious to plant more acreage the next year.[17] But by January 1944, Allied forces had eliminated the German submarine threat in the Atlantic. With jute and other foreign fibers again coming in from the Mediterranean and Caribbean, the government greatly reduced the domestic hemp industry in 1944.[18] Of the 42 Midwestern hemp mills either in operation or under construction, 28 were shuttered, and program acreage was reduced by about 60 percent.[19]

The abrupt downsizing of the domestic hemp industry apparently took Midwestern farmers by surprise, and many reacted angrily. After all, they had spent the last year learning all they could about hemp, not to mention performing the intense labor of cultivating, harvesting, and processing it. They were paid well for that work, and with a season under their belts, they simply weren’t ready to stop doing it.

This political backlash and the fate of America’s wartime hemp industry are the subjects of Part 2.