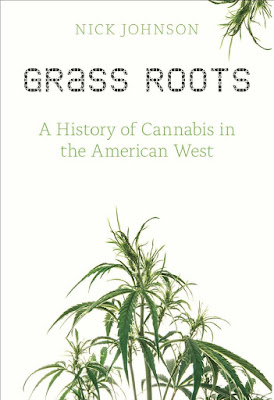 Grass Roots: A History of Cannabis in the American West is now available from Oregon State University Press!

Recommended by "Curious About Cannabis" podcast!

"...a bright spot in the ever-expanding landscape of cannabis literature...Grass Roots is a valuable contribution that will hopefully lead people to think more about the cannabis plant's ecological existence."
-Chris DuVall, University of New Mexico

"... a quick, engaging read ... a valuable contribution to our understanding of the history of cannabis in the United States."
-Adam Rathge, University of Dayton

"With his smart primer on the history of cannabis as a crop, Johnson adds a necessary addition to the growing body of literature on America's favorite plant."
-Emily Dufton, author of Grass Roots: The Rise, Fall, and Rise of Marijuana in America

"...one of the first historians to study cannabis from an environmental and agricultural perspective."
-Elizabeth Elliott, Perspectives on History

On today's episode of the podcast I'm talking with Joy Smith, founder of J oy Organics , a seller of cannabidiol products in Fort Collins, Colorado. Cannabidiol, most commonly referred to as CBD, is one of dozens of unique compounds in cannabis plants. Plenty of anecdotal evidence and recent research suggests that CBD is one of the most  medically valuable  of those compounds, useful in treating conditions ranging from insomnia to rheumatoid arthritis. CBD products are becoming more popular because they contain almost no trace of tetrahydrocannabinol (THC), the main psychotropic compound in marijuana, meaning that people can get many of the benefits of medical marijuana without getting high. After trying some CBD products in Florida to help her insomnia, Smith decided to leverage her family's considerable resources to open her own CBD shop in Colorado. The CBD in her products comes from a special variety of hemp that is grown organically in La Junta, Colorado. As a fell